PvP Events were introduced to the game on September 11th, 2012. They are the third event to have been added to the game.

'PvP Events have the player engaging in PvP as normal except that they earn points based on toughness of opponent and length of their winning streak.

Following details as of God of Steel, PvP Event 40.

Blood Clashes begin once you reach Optio! Up to 10 familiars can join in the battle! If your familiars fall, they're replaced by reserves in time for attacks.

Each time a familiar survives to its next attack round, its skill trigger rate increases. 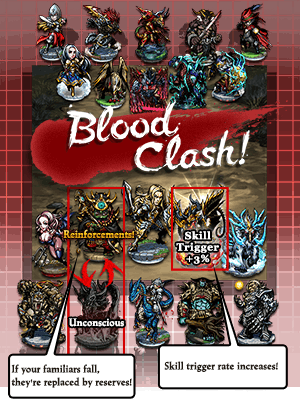 Receive a reward each time you get 3 back-to-back wins.
If you lose, your record is reset to 0.
If you don't get 3 wins in 10 minutes, none of your wins in the time period count.

After 30 consecutive victories (10 matches), the player receives their final reward and their streak count is reset to 0. The rewards given during the event differ from those given out during normal PvP.

Titles are earned by accumulating certain amounts of points during the event.

Your title affects bonuses earned in battle. Even after the event ends, your title will give a bonus in PvP battles and other events.
So what are you waiting for? Get promoted through the ranks! 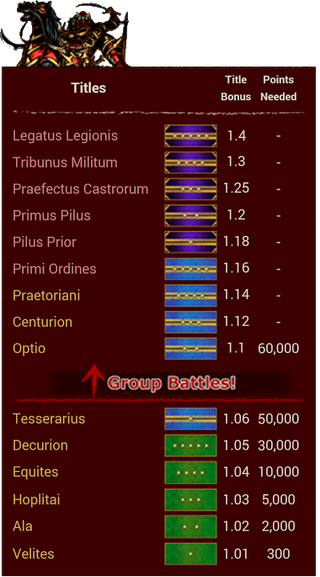 Once you reach the rank of Optio, you start Group Battles.
Groups consist of about 10 players, all with the same rank.
Players within the group are ranked by points.
The following day, a certain number of players from that group are promoted, demoted, or retain the same rank.

The number of players in a group that can be promoted two ranks depends on the title.

Group rankings are determined by points earned between 3:00 am and 1:00 am (PT) the following day.
Points earned outside these times are not considered.
Each day players are placed in new groups based on the ranks earned in the previous day's battles.
The new day's rankings begin again at 3:00 am.

The more opponents you beat during the event, the more points you'll earn. Score consecutive wins to earn even more points. While traveling through a zone, sometimes a Point Boost will occur. During a Point Boost, players receive double points from PvP battles.

Your ranking is determined by points earned during the event.
And for this event, you can win a MYTHIC!
Climb the ranks and make a mythic familiar one of your own!

You can choose to do all-out or standard attacks. All-out attacks take 3 morale, but your party's stats receive a 50% bonus.

You can use the two items listed below to quickly replenish morale:

All points accumulated during the event will affect player rankings. Rankings get updated at odd intervals, so the ranking you see in the zone may be different from the one when the event is over. We appreciate your understanding.

Rewards may change without notice during the event. Thank you for your understanding.

Titles are earned through competition with small groups of players. Each day of an event, beginning on the second day, players who have met certain point requirements will be split into groups. At the end of each day, players will be promoted, demoted, or retain their title before new groups are created for the next day's competition.


The number promoted, retained, and demoted depends on the day of the event and how many points the group cumulatively earned. The more points earned, the more people promote. The further into the event, the smaller the promotion pool becomes.

Title bonuses increase all stats except for DEF. As of May 8th, 2013 Title bonuses now apply in all situations, including PVP, raid boss events and normal PVE. Stats of familiars displayed outside of Blood Brothers, Empower, Evolution and Bazaar are raised to reflect the title bonus.

Introduction of Blood Clash: An all-out battle involving your entire party. You can participate in a Blood Clash once you earn the title of Praetoriani

. The largest possible Blood Clash is 10v10. A Blood Clash occurs every third battle (3, 6, 9...) up to the 30th. If the familiars in the front line become incapacitated, the reserve will take their place.

Event format returned to be as prior to PvP Event 16. This includes:

However, some elements were changed:

Starting PvP Event 32 M reward only for rank 10 and better with rank 90 and better getting 1 M Coin.

This is the first PvP event to introduce the Challenge Battle, with a chance to encounter them after each 3 back-to-back wins. Winning all 3 Challenge Battles in 15 minutes earns greater points and rewards.

Also first PvP event to introduce Gear as part of the rewards.

This is the first PvP event to introduce the Hall of Glory and their accompanying Mark of Glory. Marks of Glory can be obtained by completing Challenge Battles.

This is the first PvP event to introduce Swift Strikes. Get up to 3 Marks of Glory for each completed Challenge Battle in the first three days of the event!

This is the first PvP event to introduce Final Strikes. Get the Legendary reward familiar for emerging victorious in the final group battle (Tribinus Militum, Legatus Legionis)!

B
G
P
Retrieved from "https://bloodbrothersgame.fandom.com/wiki/Category:PvP_Events?oldid=544294"
Community content is available under CC-BY-SA unless otherwise noted.